The UPI service and reference data library operated by the DSB is founded on interactions with five major parties, as set out in the diagram below. 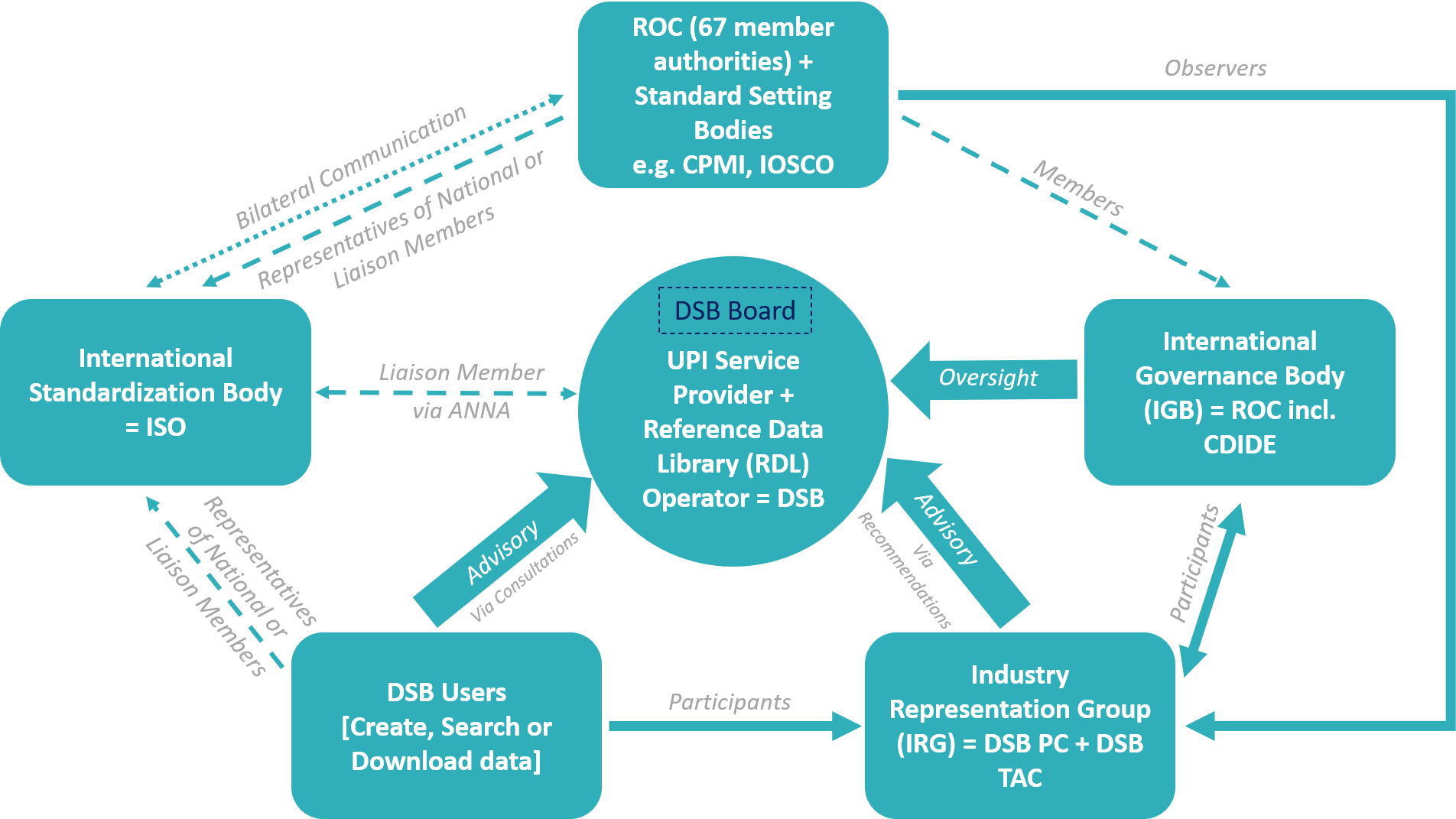 Taking each in turn, the primary stakeholder groups comprise the:

IGB: an international regulatory oversight body that should provide overall oversight and coordinate between the UPI Service Provider(s), the International Standardisation Body, and other elements of the UPI Governance Arrangements, as well as to coordinate among the various stakeholders, and other international standard-setting bodies (including the CPMI, IOSCO and FSB).[1]

The ROC is a group of 67 public authorities with full membership and 18 observers from more than 50 countries.[2] The ROC was set up to oversee the Legal Entity Identifier (LEI) and recently announced an expanded mandate to become the IGB of the globally harmonised UTI, the UPI and the CDE. As IGB of the UTI, UPI and CDE, the ROC becomes the overseer of the designated UPI service provider, The Derivatives Service Bureau (DSB).

The Committee on Derivative Identifiers and Data Elements (CDIDE) is a sub-committee of the ROC with the purpose of supporting the ROC on the ROC’s oversight of the implementation of the UPI service and the UPI Reference Data Library by the DSB. CDIDE co-chairs may participate in each of the DSB Product Committee and DSB Technology Advisory Committee (see below) which committees are the Industry Representation Groups described below.

Industry Representation Group (IRG): with representatives of, inter alia, reporting entities, derivatives infrastructure providers, and/or market data providers, to consult with other parts of the Governance Arrangements, including the IGB and the UPI Service Provider. The functions of an IRG are expected to be carried out by two existing DSB advisory committees, whose charters have been expanded to encompass the UPI initiative.

Within the DSB, the two existing advisory committees of the DSB Board of Directors are the Product Committee[3] (PC), and the Technology Advisory Committee[4] (TAC). Both committees comprise a broad range of representatives of entity types and geographical representation.

The DSB PC is an industry group that supports the DSB Board through continuing the work of the ISO study group tasked with defining the ISIN for OTC derivatives. The PC oversees the definitions of a broad range of OTC derivatives and how they translate into data requirements for allocation of these identifiers.  They also support the development and inclusion of descriptive taxonomies used to identify OTC derivatives.

The DSB TAC is an industry group that supports the DSB Board on technology issues to ensure that the DSB’s technology strategy is aligned with the needs of the markets it serves. The TAC oversees proposed technology changes related to the DSB’s services which includes any technical changes identified during the stakeholder consultation process as well as consideration of the workflows and integration needs of the UPI service provision.

International Standardisation Body: The ISO has been nominated as the International Standardisation Body for the UPI. ISO’s work on development of the UPI standard began in June 2020 with the aim of publishing a final ISO standard in early 2022. The standard will include the format and computation of the UPI code, as well as the minimum data elements driven by the UPI Technical Guidance.

ISO provides the framework allowing for a unique UPI Code to be assigned to each distinct OTC derivative product that is reportable to trade repositories.  The standard defines the UPI code structure and the minimum set of reference data elements that will describe the product. Reference data element values as well as possible reference data elements in addition to the ISO standard will be determined by the DSB Product Committee working in conjunction with the ISB.

UPI Users: UPI users comprise organizations that will connect to the DSB to create, search for, or download files – on either a fee paying or non-fee-paying basis. Based on the DSB’s experience with the OTC ISIN service, in the three-year period since the service was launched, the DSB expects to continue to see a marked difference between the number and types of firms that will create OTC derivatives reference data records in the DSB (be they for OTC ISIN, UPI, CFI or FISN purposes), and those that consume the data.

A review of current activity levels shows that an at aggregate level, the sell-side has created 75% of all OTC derivative records in the DSB, with execution platforms, the larger buy-side and some data vendors responsible for creating the remainder. In total, 124 entities pay the DSB to create data and/or search for records, with 60% of this group accessing the DSB in a programmatic manner.

When looking at the full list of organizations that access the DSB today across both fee paying and free of cost users, 470 organisations, almost 70% do so free of cost to download free to use data files. A further 25% access the DSB to create records, search for records, and download data files, with 3% exclusively creating data, and a further 3% exclusively searching for data.

In addition, the data of DSB existing users to date shows that in contrast to the creation of data which is driven by the sell-side and execution platforms, consumers of the OTC derivative reference data generated at the DSB represent a substantively broader composition as set out in the following diagram. It is a reasonable expectation that while the specific numbers of each type of organisation that accesses the DSB for UPI data will vary from current practice, the overall composition of each organisation type is likely to continue given the divergent reasons that users cite in discussions with the DSB.

UPI Service Provider(s): This entity or these entities should provide for timely issuance of UPI Codes and maintenance of their associated reference data consistent with the UPI Technical Guidance.

[1] The IGB provides oversight over the UPI Service providers and other elements of the UPI Governance Arrangements, as well coordinate with various stakeholders and other international standard-setting bodies (including CPMI, IOSCO, FSB and ISO).